Kriya Yoga is an advanced technique for spiritual evolution that comes down from higher ages of spiritual enlightenment. Part of the ancient science of Raja Yoga, it is referred to by Patanjali in his Yoga Sutras, and by Sri Krishna in the Bhagavad Gita. While the actual Kriya technique can be revealed only to initiates, its purpose and basic nature have been described by both Yogananda and Kriyananda in their respective autobiographies, in chapters dedicated to this subject.

“The Kriya Yogi mentally directs his life energy to revolve, upward and downward, around the six spinal centers (medullary, cervical, dorsal, lumbar, sacral, and coccygeal plexuses) which correspond to the twelve astral signs of the zodiac, the symbolic Cosmic Man. One-half minute of revolution of energy around the sensitive spinal cord of man effects subtle progress in his evolution; that half-minute of Kriya equals one year of natural spiritual unfoldment.” —Paramhansa Yogananda

“Kriya Yoga directs energy lengthwise around the spine, gradually neutralizing the eddies of chitta. At the same time it strengthens the nerves in the spine and brain to receive cosmic currents of energy and consciousness. Yogananda stated that Kriya is the supreme yoga science.” —Swami Kriyananda

The knowledge of Kriya became obscured during the dark age of materialism, known in India as Kali Yuga. It was revived by the immortal Indian master, Babaji, when, in 1861, he taught it to Shyama Charan Lahiri of Benares, who then developed the Kriya principles into a specific series of meditation and pranayama practices. Lahiri Mahasaya taught this science to thousands of disciples, most of them family people who, like he, maintained their worldly responsibilities while at the same time practicing Kriya.

In one of the most important passages from Autobiography of a Yogi concerning Kriya in the modern age, Babaji says to Lahiri Mahasaya:

“‘A deep purpose underlay the fact that you did not meet me this time until you were already a married man, with modest business responsibilities. You must put aside your thoughts of joining our secret band in the Himalayas; your life lies in the crowded marts, serving as an example of the ideal yogi-householder.

“‘The cries of many bewildered worldly men and women have not fallen unheard on the ears of the Great Ones,’ he went on. ‘You have been chosen to bring spiritual solace through Kriya Yoga to numerous earnest seekers. The millions who are encumbered by family ties and heavy worldly duties will take new heart from you, a householder like themselves. You must guide them to see that the highest yogic attainments are not barred to the family man. Even in the world, the yogi who faithfully discharges his responsibilities, without personal motive or attachment, treads the sure path of enlightenment… A sweet new breath of divine hope will penetrate the arid hearts of worldly men. From your balanced life, they will understand that liberation is dependent on inner, rather than outer, renunciations…

“I gazed beseechingly at Babaji. ‘I pray that you permit me to communicate Kriya to all seekers, even though at first they cannot vow themselves to complete inner renunciation. The tortured men and women of the world, pursued by the threefold suffering, need special encouragement. They may never attempt the road to freedom if Kriya initiation be withheld from them.’

“‘Be it so. The divine wish has been expressed through you.’ With these simple words, the merciful guru banished the rigorous safeguards that for ages had hidden Kriya from the world. ‘Give Kriya freely to all who humbly ask for help.’”

Please go first to this page about Kriya Yoga:

THE MEDITATION PATH OF KRIYA YOGA

Paramhansa Yogananda is a direct spiritual descendant of Babaji and Lahiri Mahasaya. His guru, Swami Sri Yukteswar Giri, was one of Lahiri Mahasaya’s most advanced disciples. In 1920 Yogananda was instructed by his gurus to bring the practices of Kriya and the knowledge of the eternal, universal truths (known in India as Sanatan Dharma) to the Western world. From then until his passing in 1952, Yogananda lived in the United States, where he initiated tens of thousands of sincere seekers in Kriya, inspiring them to dedicate their lives to the pursuit of God-realization.

Whereas in India the guidelines for living a spiritual, “yogic” life are well known, in the West Yogananda had to educate people about such things as proper diet, right attitudes, balanced living which harmonizes body, mind and soul; developing willpower and self-discipline; and how to transcend physical and emotional attachments. These “how-to-live” teachings have become an essential part of the path of Kriya Yoga and are a necessary requisite to learning the technique of Kriya Yoga, in the same way that the yamas and niyamas of Patanjali are necessary steps towards the higher levels of Raja Yoga.

Yogananda’s teachings thus put the technique of Kriya Yoga into the wider context of a yogic lifestyle. Educational centers and communities based on this lifestyle have been developed in the United States, Europe and India by Yogananda’s direct disciple, Swami Kriyananda.

Spiritual masters usually empower some of their close disciples to carry on their tradition, even during their own lifetime. Interestingly, we find that, “Jesus himself baptized not, but his disciples.” (John 4:2)

Paramhansa Yogananda also authorized a number of his close disciples to give the initiation on his behalf. Some of these disciples were part of his monastic order, while others were householders, in the Kriya tradition of Lahiri Mahasaya.

When Swami Kriyananda had been with Yogananda for less than one year, the Master placed him in charge of the monks and authorized him to give Kriya initiation. During the remaining years of Yoganandaji’s life, Kriyananda often gave the initiation. After Yoganandaji’s passing, Kriyananda was sent around the world to speak about Self-realization and give initiation into Kriya.

After founding Ananda in 1968, Kriyananda continued to train devotees in the teachings of Self-realization, helping them to prepare for and receive Kriya, each student according to his own capacities and pace. In recent years Kriyananda has authorized some members of the Ananda Sangha to give Kriya initiation in Yogananda’s name. There are currently more than twenty Ananda “Kriyacharyas” who give initiations throughout the world. 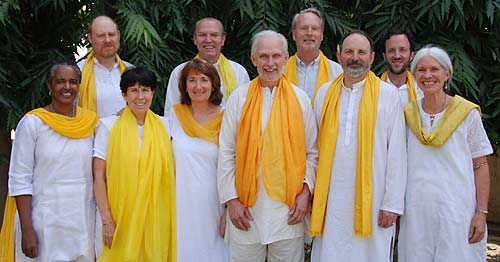